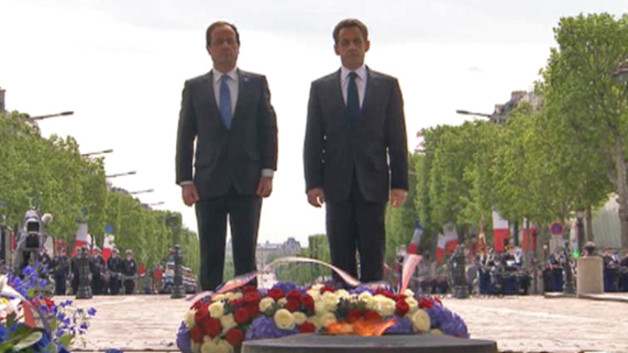 It sounds like the French have reached a critical mass of "takers," i.e. people who have no compunction about cannibalizing the nation if it means they are provided for. This kills any chance of real reforms, especially when it comes to things like labor regulation. I suspect that France, unfortunately, must bottom out further before standing a chance to repair herself. The next step will be to expropriate actual wealth from those who have it, not just the bulk of income from those who earn it. It's gonna get messy.

A horrific future of chaos and violence awaits them

If the French pick Sarkozy they will continue on their no-so-gentle glide slope down. If they pick Hollande they will simply crash sooner. This will have an effect on the entire European economy ranging from bad to severe. Since the German tax payers and industry can't hold up all of Europe THEY might choose to leave the Euro and go back to the DM - in which case the whole project will collapse..

So that's the political choice the French, and most other European voters are given: Weakness, or Socialism, or both

Sarkozy has done nothing in 5 years. He is simply another non-conservative, mouthing bromides to get elected. What a joke. More interested in photo ops and power than actually doing something intelligent. He will not be re-elected. Why vote for socialist light when you can have socialist heavy in the form of the mental degenerate Hollande and 'free' money for all ? Will he change his name to Muhammad perhaps to swing over the Islamicized French non-Republican voters ? Might as well get the bankruptcy process started early. Vote for Mo Hollande.

This article well reflects what a French friend wrote in relation to needed welfare cutbacks and the French election,
"...The other priority should be cutting back the obscene amount of money spent by the state to make people believe it really works (limousines, jets, official trips, summits, dinners, useless departments, etc)... But it is exactly what they have been reluctant to do. When he was elected in 2007, Sarkozy was expected to be a kind of Margaret Thatcher, at least enforce his strong economic and social measures. On the contrary, he kept backing up at the first sign of a protest, he did not suppress what the left had started before he was elected, did not fulfill his promises, he hired ex socialists or left wing people (he even married one, by the way). Paradoxically, opinion polls show that a majority of French people wish a right oriented policy, but they are so fed up with the dwarf (one of Sarkozy's knicknames) and so eager to get rid of him, that they are ready to elect the socialist loser, even if they don't like him."

Alors Enfants de la Patrie, le Jour de Gloire et arrivé on Sunday!!
Mais oui, mais oui.
On Dimanche, you will be dreaming that you are in Fantasy Land, as you have for the last 40 years.
In a dream where there is no opportunity cost, everything is free, and where incentives play no role whatsoever. Francois Hollande will build upon this dream, you will see.
What will it take, Enfants de la Patrie, for you to wake up?

It sounds like the French have reached a critical mass of "takers," i.e. people who have no compunction about cannibalizing the nation if it means they are provided for. This kills any chance of real reforms, especially when it comes to things like labor regulation. I suspect that France, unfortunately, must bottom out further before standing a chance to repair herself. The next step will be to expropriate actual wealth from those who have it, not just the bulk of income from those who earn it. It's gonna get messy.

The big risk in this as in practically all French elections is that France will get the government the French deserve!

Au contraire, they are reading too much Paul Krugman. They ought to look at Venezuela, Argentina and Cuba. Then they need to decide if they want to “get real”. The French are fabulous at looking reality in the face and applying their famously foolish intellect make exactly the wrong choice.

Instead of a Napoleon or Hitler, Europe and more specifically France, are facing the excrement run-off of an ideology of entrapment which pitted the tyranny of bureaucracy against the freedoms of the individual. The tyrants were clever, but eventually they ran out of other people’s money. The real problem is that the citizens of France and Europe have just begun to wake up and are not fully cognizant of the dilemma which they have confined themselves too. On the other side of the wring are the bureaucrats, who like our democrats, have been telling lies so long they are beginning to believe them. Therefore, this French revolution is between the masses, ever more indignant at their learned serfdom situation and a monolithic authority whose position forces them to construct a wall of disbelief as to the upstart citizens who ungratefully should challenge the best years of their harness building. If this doesn't sound familiar, watch France and remember, these are the taxpayers who invented the guillotine. The modern world is a communications bazar which brooks no quarter for special anything. France has become the classic tyranny whose worth will soon be weighed in blood of its own making. Tragically, neither side has become aware of the socialist lie they live in so a logical extension of opinion must weigh France and Europe's fortunes within the weight of the blood they shed.

What we are watching is the death of socialism. Some skirmishes will be won by the other side, but those victories will be short lived. I say, Godspeed Hollande or even Melancon. Your victory will speed your demise.

I can only hope the the leftist party wins. Maybe after seeing a few implosions from following the "all our problems are because of the rich" crowd, our country will finally see the light.

I've long thought that the reason French intellectuals hate the United States is that the two countries are alike in so many ways. This article is another piece of evidence for my thesis.

"Inside Mr. Hollande's gift bag: 60,000 new teaching jobs, new housing subsidies and rent controls, and increased public funding for small and medium enterprises. He would raise the minimum wage to €1,700 a month and enact a new law to prevent and fight layoffs. He also promises to reverse Mr. Sarkozy's most important domestic-policy victory: raising the retirement age to 62 from 60. "
Wow! That should hammer the last nail or two into France's coffin. No way the EU is going to survive the coming collapse of France... but we'll have a chance to pick up a nice chateau or two on the cheap!